Last night, June 16th, 2012, Richard Rosenberg conducted CATcerto by Mindaugas Piecaitis at the closing of this years National Music Festival in Chestertown, MD. As you know, CATcerto was written especially for me, and I appear via video on a large screen above my human collaborators. The piece has been performed over 17 times by orchestras around the world. Maestro Rosenberg has, himself, conducted the work four times. What makes last nights performance especially significant for me is that my personal assistants, Burnell and Betsy, were able to attend the concert on my behalf. I don’t travel well, so I tend to stay home. It was a fantastic experience for them both, as this was the first time they had seen it performed live. They also got to meet the conductor afterwards. I am told he is not only a big fan of CATcerto as a musical work, but also is quite a fan of yours truly. And he’s a real animal lover who, along with his wife, Caitlin Patton, has rescued a number of other very lucky dogs and cats. Here’s a photo of the Maestro with Betsy taken by Burnell. Other photos were taken by another photographer, and as soon as I get copies of those, I’ll post them. 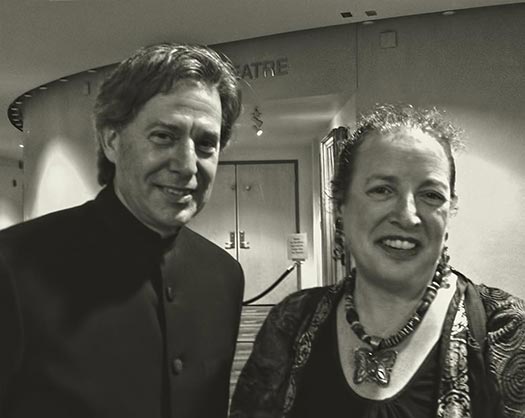