I love visitors. I love meeting new people. I love their surprised wide-eyed looks when I play that first note. And of course I love the inevitable applause and the subsequent posing for photos. So you can imagine I had a great time today meeting Brazilian journalist, Roberto Kaz, and his wife, Audrey. Audrey is also a writer, and they are currently living in New York while Roberto attends Columbia University as a graduate student. 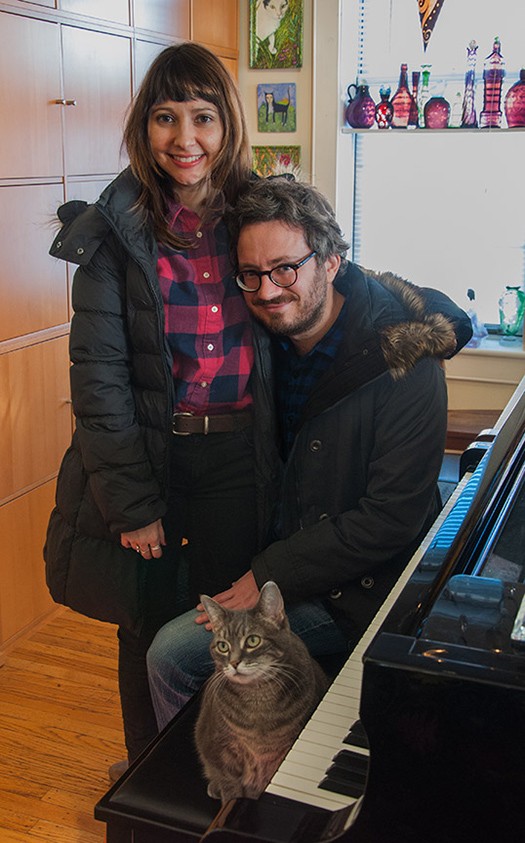 Roberto is writing a book on “unusual, important, or charismatic animals, such as Brazil’s most renowned breeding bull, or its last blue macaw to live in nature.” And he wants to include me in the book, hence his visit. He’s also a fan of CATcerto and has interviewed its composer, Mindaugas Piecaitis.

When Roberto contacted us about coming to Philly to meet me and to interview my purrsonal assistant, Betsy Alexander, she immediately suggested inviting Richard Rosenberg and his wife, Caitlin Patton, of the National Music Festival. Caitlin is the Executive irector of the festival. Richard is its Artistic Director and conductor. Richard has also conducted CATcerto four times, including it’s US premiere. Last year, I was named the official mascot of the NMF.

We all had a great time, even though I got a little bored while Richard and Betsy were answering all Roberto’s questions. But I would never tell them that.

The photo of Audrey, Roberto, and yours truly was taken by Burnell, my other purrsonal assistant.