I am twelve-years-old. My birthday is in September. I have been playing pretty much every day since I was one-year-old. Pretty amazing, eh? The video above was recorded by my purrsonal assistants on October 12, 2016. I hope you will enjoy it, share it, and will subscribe to my YouTube channel, as well as “Like” my Facebook page at: http://facebook.com/norathepianocatpage

Believe it or not, I am one of the famous cats revealed in a soon-to-be-released video game from Valhalla Cats. Here’s a teaser.

Rennie was adopted not long after me. He was the cutest kitten, and we got along very well. Unfortunately, a few years down the road he became intolerant of a later adoptee named Ellie. For reasons which I won’t go into here, it became necessary to separate the two of them. That’s when Rennie became the art studio cat. Even though the art studio is the first floor of my house, and there is a screen door to the studio entrance, I seldom see Rennie because I pretty much stay on the second and third floors. Anyway, here’s the latest episode in my The Cats of Raven’s Wing series starring Rennie in “Size Matters.”

A Paws-Up To My PAs…

A brand new video from Team Nora. What’s Team Nora? Well, as you know, I am a musical diva and an internet phenomenon. But no one who gets to where I’ve gotten gets there alone. My team is made up of my two purrsonal assistants, the mixed media artist Burnell Yow! and the composer, teacher and musician Betsy Alexander. And this newest video is kind of a shout out to them – as well as a platform for revealing even more of what makes me the diva I am. Hope you enjoy and will share and comment.

Have I Been Spoiled By Success?

There is a new video, rather one-sided, I might add, that is causing some stir on the internet. In the interest of truth and for the exposure of yet another example of manipulative use of the media, I am providing a link to this video.

While it is true I have a well-deserved reputation for being a classical music diva (check out CATcerto, composed and conducted by Mindaugas Piecaitis), I also have a bluesy side and the chops to go with it, as evidenced by this blues riff I composed on the spot the other day.

Does your cat like watching and/or interacting with my videos on the internet? Have you recorded it and posted it to YouTube or another video-sharing site? If so, please send me a link so I can share it here and on my Facebook page.

Here’s two videos of cats watching me. They seem to enjoy it, don’t you think?

Nora Gets Snappy with Visitor… 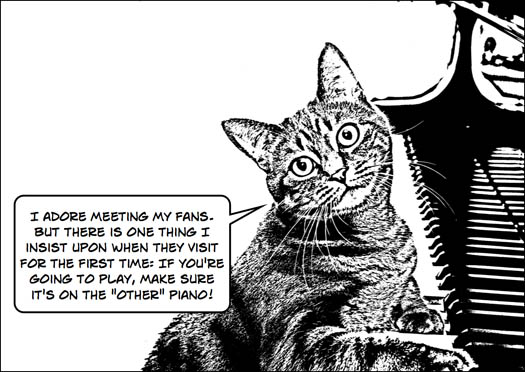 Yu Xi and her husband, Daniel, stopped by on February 5, 2012 to meet the Diva (that’s me). I guess you’d say I was happy to live up to my reputation as evidenced by the video clip below. In my own defense, I must say that my meow is a lot worse than my bite, which is more of a playful nip. I’m going more for the surprise element. Sure seems to get their attention. Yu Xi and Daniel were very understanding, and we had a very nice visit.

Mindaugas Piecaitis, composer of CATcerto, which was inspired by my piano playing and features me as guest soloist via a video screen, created a piano score of the Main Themes from CATcerto. And here’s a video of Clemens Kummer, a student of Piecaitis, playing the piano piece. If you enjoy it, please consider leaving a comment on YouTube and sharing it with your friends.