As many of you may know, I was adopted from an animal shelter. My humans, Burnell and Betsy, and I are very concerned about the plight of cats in shelters around the world. So, if you’re looking to adopt a cat or cats, please check the animal shelters near you. I’m certainly glad that Burnell and Betsy did. And while not all cats can play the piano like me, we all need a loving home. In fact, Burnell created a new 11″ x 17″ poster of me saying exactly that! It’s the “Adopt A Shelter Cat” poster, and you can get one for yourself from my store by clicking HERE.

You can see the larger version by clicking the thumbnail.

Valerie Williams of Temple University spent a couple of hours with me recently. Mostly she was interviewing Betsy, which is understandable, I guess. Anyway, I was pretty occupied on the piano at the time. Valerie is a writer for TU’s PH Magazine, whose tag line is “Taking philly living to the next level.” Val’s article is called “The Feline Mozart.” And it’s part of a larger article on 3 Philadelphians who’ve become cyber stars – yours truly being one of them. You can download the pdf of the article complete with really cool photo of me with head on the keys taken by photographer Jimmy Giambrone. It’s kind of big download (416K) because of the photo, I guess, but it is pretty cool. Download it HERE.

Kitty Knows the Keys to Success…

Check out the article on me and my humans in the Philadelphia Inquirer. It was written by Daniel Rubin and the photos were taken by Ron Tarver.Click HERE to read it.Visit Ron Tarver’s website HERE.He’s really good!.Love, Nora

Yep, the laughing baby won the YouTube Award for Most Adorable video. It was pretty cute. But that’s okay. Because of a poster Betsy put up asking people to vote for me, Daniel Rubin, a reporter/columnist for The Philadelphia Inquirer, decided he wanted to meet me and to write an article about me. I’ll let you know when the article comes out. Cheers, Nora

I'm gonna be on the BBC…

In additional Nora Mews, a film crew from Blink Television in the UK flew in from England recently for a two-day filming of me for an upcoming episode of “Extraordinary Animals.” Mike, Simon, and Neil arrived in Philly with clipboard, camera, and boom mic in hand to capture me being me, and to interview Betsy about my extraordinary ability. They even brought in animal behaviorist Beth Adelman from New York City to meet with yours truly and to discuss on camera her views on why I do what I do. It was great fun, and the guys were brilliant!

Betsy and Burnell just told me that I’ve been nominated in the "Most Adorable Video" category in the 2007 YouTube Awards. Voting is open now through March 19th, so it would be great if you could stop by http://www.youtube.com/ytawards07 and cast your ballot. It would definitely put a smile on my face and a purr in my heart.

My dad got an email yesterday from Jen at People Magazine. They wanted permission to use a photo of me in their “Best of 2007” issue. It will be out on December 31st. Let me know what you think. 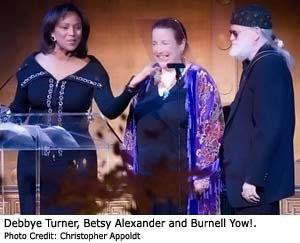 Well, Betsy and Burnell went to the 2007 DogCatemy Awards Gala in New York last night. Three videos were in the running for “Best Musical.” One of them was the piece that Debbye Turner did about me for the CBS Early Show a while back. And guess what? We won!! B & B joined Debbye at the podium to accept the award on my behalf. I don’t travel very well, so I stayed home and mostly slept. Anyway, now it’s on my piano. Debbye got one too. Katie Lee Joel, Billy Joel’s wife, was one of the presenters, and she told everyone that Billy loves me. In fact, according to what my mom told me, he’s obsessed with me, and likes to watch my videos a lot. Maybe someday I can play a duet with him. That would be fun. Wouldn’t it? A lot of people there had seen my videos. I kind of wish I was there, but I heard there were a lot of dogs there, and so maybe I’m glad I stayed home.