Are You A Diva, Too! 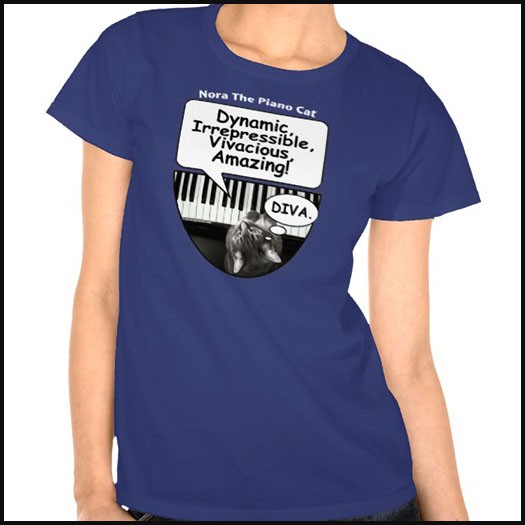 Sure, I’m a Diva, and I’m loving’ it. I’d be willing to bet you have an inner Diva just waiting to purr. Just waiting to show the world your purr-pose.

And if you like the Nora Diva tee, you can order yours by clicking here.

If I’m not playing the piano, I find myself dancing. And I do have a favorite partner, someone every bit as fantastic as me. Who might that be? Watch the video below and find out. If you like it, leave a comment, and don’t forget to share with your friends.

The Maestro Meets His Muse…

August  24, 2012 – a day that will live in the annals of feline history forever. It was the day that a human travelled across the ocean to meet his feline muse. The human was a Lithuanian composer/conductor by the name of Mindaugas Piecaitis. As my many fans, friends and admirers know, Maestro Piecaitis is the composer of CATcerto – a concerto inspired by the piano stylings of yours truly, Nora The Piano Cat. This wonderful piece of music was written and conducted by Piecaitis and performed by the Klaipeda Chamber Orchestra. I, of course, was the guest soloist and appeared via a pre-recorded video projected onto a large screen behind the orchestra. The concerto went on to be published by Peters Publishing and has been performed, to date, twenty times in five counties since it’s premiere in 2009. The video of the world premiere in Lithuania has been viewed several million times on YouTube. All this and still I had not met the composer face to face. All that changed on August 24, 2012. 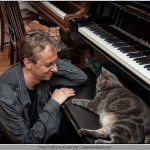 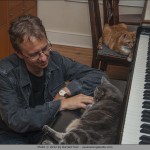 Maestro Piecaitis arrived in the early evening. As he rounded the top of the stairs, I ran to the piano, jumped up on the bench and struck a few notes. He smiled and hurried over. “I feel I am dreaming,” he said. I settled in and allowed his adoration to continue. For a time, he sat on the floor and gazed into my eyes as I gazed into his. I stretched out a paw and touched his hand. It was moment of communion between like minds, between kindred spirits. Piecaitis did, with CATcerto, what I most certainly would have done had I been born with ten fingers. (Click thumbnail to view full image.)

Later, during our three day visit, I played a bit more and he displayed a few playing techniques he had learned from watching my videos. He’s working on mastering the head roll. I felt honored and humbled. When he left, I felt sad but also very happy we had had the time to share some very special moments. And I’m certain we’ll meet again. 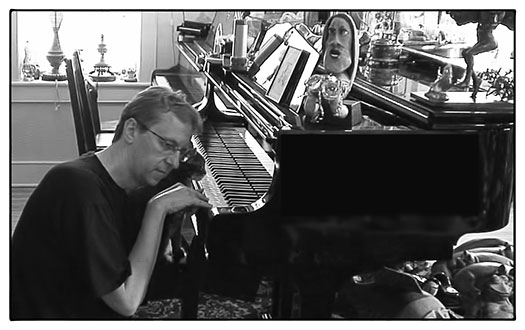 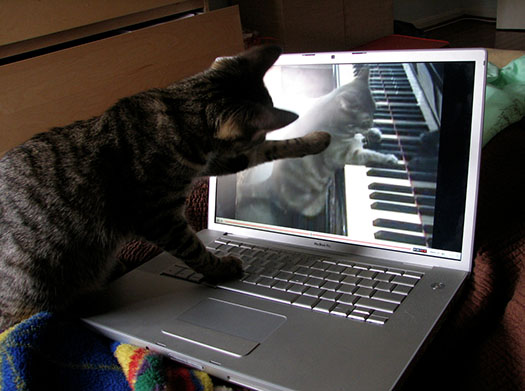 The scene above has been repeated a number of times, according to my fans. Really. It usually goes down like this: a human brings up one of my YouTube videos on their computer, and another cat (obviously one with great musical taste and an appreciation of real feline talent) enters the room, jumps up on the desk or bed, etc. and proceeds to interact with the image of yours truly on the screen. This interaction can take several forms: 1) Pawing at the screen. 2) Meowing. 3) Sitting quietly and staring with rapt attention at the amazing performance unfolding in front of them. The cat pictured above is named Muffin, and her human, Nathalie Cone, took this photo of Muffin expressing her admiration for the diva. That’s me.

Anyway, I want to thank Nathalie and Muffin for permission to post this wonderful photo. And I’d also like to invite all of my human fans to send me photos or videos of their feline companions showing them appreciating my videos. Please include your names, as well. By sending me the photos or short video clips (links to clip on YouTube preferred, if available), you are agreeing to allow me to post the images or links on my blog/website.

I had breakfast at my usual time: 7 am. I had barely finished and headed off to resume my napping, when the doorbell rang. I knew immediately who was at the door. And how could I disappoint them. They had come across the ocean for an audience with the diva. In they came: one, two, three, four human beings carrying all manner of bag and padded case, from which miraculously appeared every kind of technical gadget: big cameras and little cameras, big lights and little lights, tripods, and wires! There were so many wires that the floor around my piano began to resemble a den of snakes. Fortunately, I was already on the bench, and I was determined to stay there.

As the morning progressed, I played and posed to the delight of one and all. Then a few of Betsy’s students began arriving to be interviewed on camera. I even heard the crew filmed at a cafe about a block away, and there they talked to some of my neighborhood fans. Wish I could have been there.

I was a little disappointed that Burnell didn’t take more photos. Turns out the director really wanted Burnell to be in the film as well (something he wasn’t too keen on), so that meant he was in front of the camera instead of behind it. Oh, well. The girl in the photo above is Emma. She’s a student who plays with me often. Her dad took the photo. The other photo is of Ross, the camera man.

So, the film, which is a behind-the-scenes look at the lives of famous animals – and features 7 other non-humans – will probably be shown on UK television in July.

Another Productive Trip to the Vet… 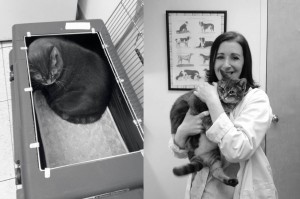 Just got back from a trip to the vet. And I have some great news: I’ve lost 3 pounds since B&B started monitoring my daily food intake a number of months ago. As you know, I had gotten up to 16.6 pounds, and my fans, my vet, and B&B were concerned. Well, I weighed in this morning at 13.6. My vet, Dr. Yallof (that’s her holding me in the photo) was very pleased. She wants me to lose another pound, and she suggested I come back in for a teeth cleaning. Doesn’t sound like much fun to me, but I got to thinking that maybe I’ll get veneers while I’m there. I hear they’re all the rage among the Hollywood crowd. And what’s good enough for Angelina is certainly good enough for me. What do you think?

Anyway, Dr. Yallof said I was doing great and was very healthy. And isn’t it wonderful that she posed for this photo with me. The doctors at Queen Village Animal Hospital are all so wonderful. (Click the image to view larger.)

It’s a Small World, Even for a Cat… 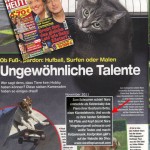 Who would have thought that a simple cat like me, born on the streets of Camden, NJ in the United States, would have fans and friends from all over the planet. I am definitely one fortunate feline. 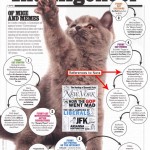 While visiting New York City today, B&B were surprised to find that the November 28th issue of New York magazine referenced yours truly (twice) in a short piece about cat humor. Funny how some folks just can’t take a piano-playing cat seriously. Perhaps if I stood up and told a joke, they’d write about my immense and remarkable talent on the ivories. So, a cat, a mouse, and a goldfish walk into a bar….

Mindaugas Piecaitis, the composer of CATcerto, just sent B&B a scan of one of the pages of the printed program for the recent performance of CATcerto in Amsterdam (November 11, 2011). As you know, CATcerto was composed by Piecaitis and based on my piano stylings. It features yours truly as guest soloist via a large video screen placed behind the orchestra. As of Nov. 11, CATcerto has been performed fourteen times in five countries. 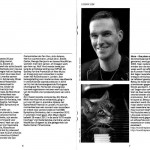 Maestro Piecaitis explains that it is customary in a program to list first information about the pieces being performed, then about the composers, and finally about the soloists. This image is a scan of the page about the soloists – complete with photos. I can’t read the paragraph about me, because it’s in Dutch. Any Dutch-speaking fans out there care to translate? (Click thumbnail to view full image.)

A YouTube video of the very first performance of CATcerto, performed by Klaipėda Chamber Orchestra in the Klaipėda Concert Hall in Klaipėda (Lithuania) on 5th June, 2009, can be found at: http://youtu.be/zeoT66v4EHg

You can also read more about it right here on my website by clicking the “CATcerto” button at the top of the page. 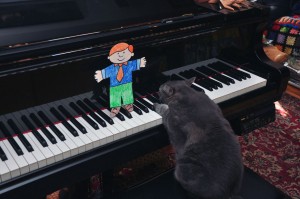 Oh, my. I’ve had many visitors over the last several years: boys and girls of all ages from toddler to adult, even a dog or two. But I’ve never had a flat visitor until I met Flat Stanley. He came along with a student of Betsy’s one day, and he hung out on my piano for an hour or so. (Click image to view larger.) 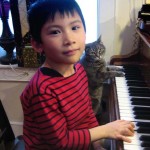 The student’s name is Asa, and he was involved with the Flat Stanley Project, which is an international literacy and community building activity for students of all ages, teachers and families. It’s pretty cool. People all over the globe cut out and color Stanley and mail him just about everywhere. He’s even met President Obama (there’s lots of photos on the Flat Stanley website. – www.flatstanley.com) So, check it out. Hey, maybe there should be a Flat Nora Project! (I said “flat,” not “fat.”) 🙂