Today Show with Matt Lauer and Nora The Piano Cat…

Well, well, well. My human’s are breathing a sigh of relief now that the live feed for the Today Show is over. Me? I’m just back to my usual routine: sleeping, eating, making music.

The day for me began quite early, say 4:30 am, when Betsy got up and started to do some final straightening up in preparation for the arrival of the Today Show technical crew. 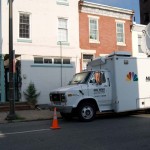 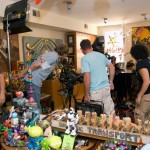 They arrived with their satellite truck at around 6 am. Then from 7:30 or so, I began to be called upon for what they call “teasers” in the business: just a few seconds on camera to let the folks watching at now what was coming up in the next hour. For the teasers, Burnell held me and Betsy petted my head. I don’t like to be held all that much, but I will tolerate being held by Burnell. I feel pretty safe in his arms – something about the way he cradles my feet and holds me very close to him. Anyway, we had three of those teasers, and in between I was back in the green room (actually it was the bedroom upstairs, and it isn’t even green). 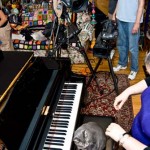 Finally the big moment arrived and we were live via satellite with Matt Lauer. I know there was concern that I might not be in the mood to play a few notes once the cameras were rolling and the world, as they say, was watching. But, much to the deliight of Betsy, I did feel like playing a brief riff. I played more after the cameras stopped. All in all, it went quite well I thought. Hope you enjoyed it.

Yours truly on a live feed for NBC's Today Show…

That’s right! On Wednesday, August 19th, 2009, a television crew from the Today Show will be setting up a live feed from my home and my piano. I will be exposed to the world in real time. Now, here’s the thing: I play only when the mood and muse strikes. I don’t play on command, although coaxing sometimes helps get me in the mood. So, the question is will I play when THEY are ready to broadcast? I honestly can’t guarantee it. You’ll simply have to tune in and keep your paws crossed. But play on camera or not, I’m sure we’ll have a good time – and Rennie will love climbing into all their equipment cases.